The importance of moving your body

It’s a new year and it’s the first blog post I write for Ephemeral Energy. It’s also related to what was the start of my journey of improving my own health and wellbeing.

This could have been entitled “the issues with sitting too much”, but I like to reach for more positive angles on things. And I’m sure you’ve heard it before. It’s not news, yet it remains a huge challenge in most people’s lives in “the western world”. Sitting in a car/bus/train to/from work, sitting at work/school, sitting at home watching TV, playing games, etc., can take up the vast majority of the waking day before laying down to sleep (which could be active for some, admittedly).

We have not evolved as a species to be sedentary, but what are the challenges/issues we face with such a sedentary lifestyle? And given that going to the gym to get fit is probably the most common new years resolution, year after year, means we’re probably not getting to grips with the real issues.

Perhaps the issue we hear the most about is gaining weight. About 2/3 of the UK population is obese and it linked to some unpleasant diseases like diabetes and heart disease, which is why there are health policies on the topic. But such diseases seem unlikely to happen to you, right? I thought I’d focus on some more common things here that people may not think about, but probably affect them.

Got neck problems? Lower back problems? Hip issues? Sciatica symptoms? Yeah, that could be because of a lack of moving. The founder of NeuroKinetic Therapy® (NKT) has got a nice phrase I’d like to share and tie in with such issues:

“People who sit too much are gluten and lactose free”

I’m aiming to make this accessible to people, so I shan’t go into a lot of detail. But let’s take an example with the lats. They do a lot of different things in the body, one of which is to depress the scapula (think pulling shoulders downward). It does that together with the Lower (ascending) Trapezius that I’ve also marked on the photo above. If these muscles are not working properly, the elevators of the scapulae may start overworking. Think Upper Trapezius and Levator Scapulae (not marked) pulling the shoulders upward. Muscles overworking for large muscles like the lats is a good recipe for pain. Add some stress to that. Not a good combination. 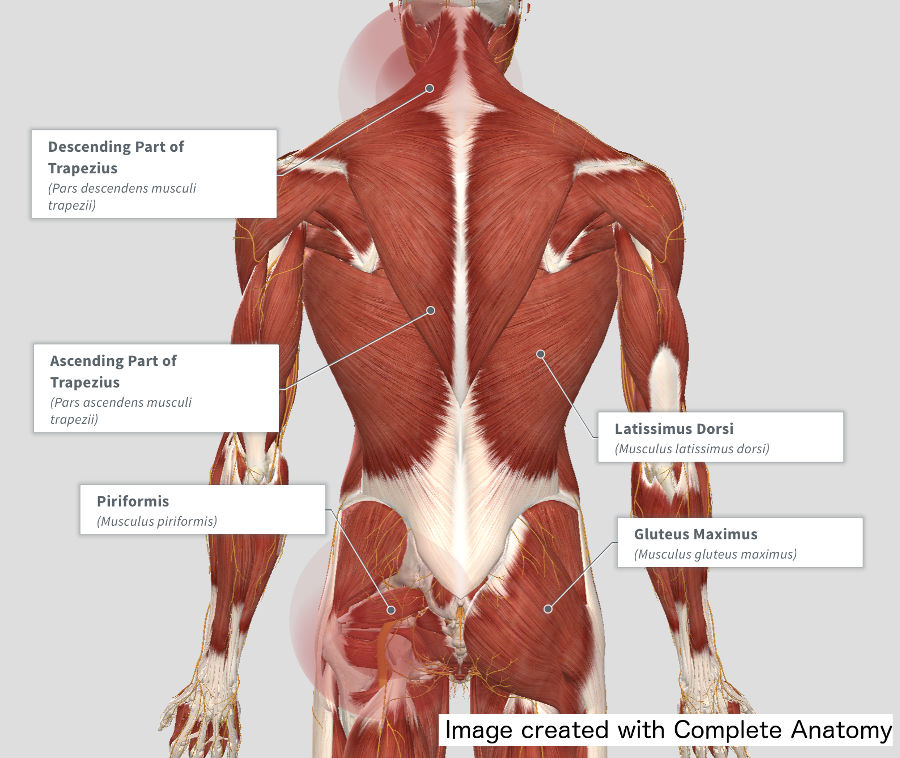 If muscles like the Upper Trapezius and Levator Scapulae are overworking, becoming tight and compressing the neck, all sorts of issues can come from that. For example, the Phrenic Nerve originates from the neck (C3-C5), which is connected to the diaphragm. A pretty important muscle for breathing and core stability. One of the knock-on effects is lower back pain. I know this first hand all too well.

Another big muscle of the body is the Gluteus Maximus. One of its functions is to externally (laterally) rotate the hip/femur, along with lots of smaller muscles like the Piriformis. As with the example above, when such a large muscle becomes dysfunctional and smaller muscles take up the slack, problems are likely to follow soon enough. Hip pain or even sciatica symptoms can be a result of a Piriformis overworking for the Gluteus Maximus.

There’s a lot more to be said here, but I think the above examples are good ones to start painting a picture.

So, we need to move? Go to the gym then?

Well, for me, going to the gym was a really important first step. I had the benefit of getting some advice on some exercises to get started and begun educating myself and getting to know my body better. However, you may find, as I did, that just going to the gym isn’t enough to really resolve the issues.

As discussed more fully in a blog post by the AMN Academy, typical gym-time is unlikely to counter-balance the effects of sitting too much. They offer some neat suggestions on moving in a way that is likely to have a greater effect on your health. And I would add to this, that it can be prudent to investigate other life-style changes and looking into options for changing things at your work place, like getting a stand-up desk or a deer.

Making changes in our lives, although we want to feel better, can be daunting. A part of you knows about the sort of things I’ve written about here, and you may be motivated by guilt more than anything to make some changes. Perhaps as a new years resolution, or before the summer season kicks in. So I’d like to end with passing on a few things from one of the most influential authors on my life, Dan Millman. The following is a brief glimpse from one of his lesser known books No Ordinary Moments.

Think of your body like a child. If you’re a parent, this may be very easy. If not, I’m sure you can get the gist anyway.

How many children do you know that does something you want because you say it’s good for them? How many children can you think of that respond better when you help to make the task fun or ensuring they get the occasional treats as a reward? So, think about how you can move more and have fun while doing it? Does the gym sound fun? If not, anything else? Can you make a compromise with yourself? If you do x, y and z, can you treat yourself to something you’ll really love?

Dan talks about how change starts becoming a new pattern after about a month. I can relate to this, so I am happy to share this notion further, as it’s important in the above context. Once a new pattern is established, it becomes so much easier. What was once daunting will hopefully become an enjoyable part of your life. That’s what I seek, at least.

Finally, and this does go against my wiring a bit, but I think I’ve started to learn the hard way… I’ve heard this many places, but forgive me for not referencing now beyond Dan’s book. Start small and build it up. And whatever you do, do it regularly. I remember when I first started learning about meditation, this was emphasised. 10-20 minutes each day is better than 1 hour once or twice a week. I think the same notion applies here.

“A little of something is better than a lot of nothing”

This blog is for sharing information about health & wellbeing, personal development and raising awareness of the services offered at Ephemeral Energy.

We don't use cookies for Analytics, Social Media or Advertisement! However, we use cookies that are related to security software to prevent bots from hacking this website and for log-in functionality. If you continue browsing this site, we assume that you consent to receiving cookies and agree to our terms and conditions. Learn more.